ULS is the only team to remain unbeaten after five rounds of 2020 Korean League, while SEGN could climb to third with a victory today.

Chung-yong Lee‘s first-half brace powered ULS to a 4-0 win over Pohang (POH). He limped off on the hour mark, but In-Sung Kim and Júnior Negão added a goal each to help ULS grab three points.

SEGN’s impressive start to the new season came to an end after Daegu (DAE) claimed a 1-2 win. The hosts took the lead through a Dong-hyeon Yang penalty. But DAE hit back within ten minutes and added another goal soon to seal their first win of the season.

Goals scored at *Home by ULS in two games – 5⃣

Goals conceded at *Away by SENG in three games – 1⃣ Pick your ULS vs SEGN playing 11

JEO, who only conceded three goals so far, is top of the table with 12 points from five matches, but their opponents INC is still looking for their first win and is at the bottom of the table.

Three second-half goals, including a double from 41-year-old Dong-gook Lee, helped JEO claimed their first big win of the season. Kyo-won Han opened the scoring for JEO, while Seung-ki Lee grabbed a goal immediately after the break, and Dong-gook Lee scored twice to sink Seoul (SEO) 1-4.

INC suffered their third straight defeat after conceding a late goal against Gangwon (GNGW). Ho-Nam Kim put INC ahead in the 22nd minute, but the visitors equalised immediately. It looked like both teams will share a point, but INC conceded a penalty in the 83rd minute, and Moo-yeol Go converted it to give GNGW three points.

Goals scored by JEO in the 2nd Half – 7⃣

Goals conceded by INC in the 2nd Half – 4⃣ 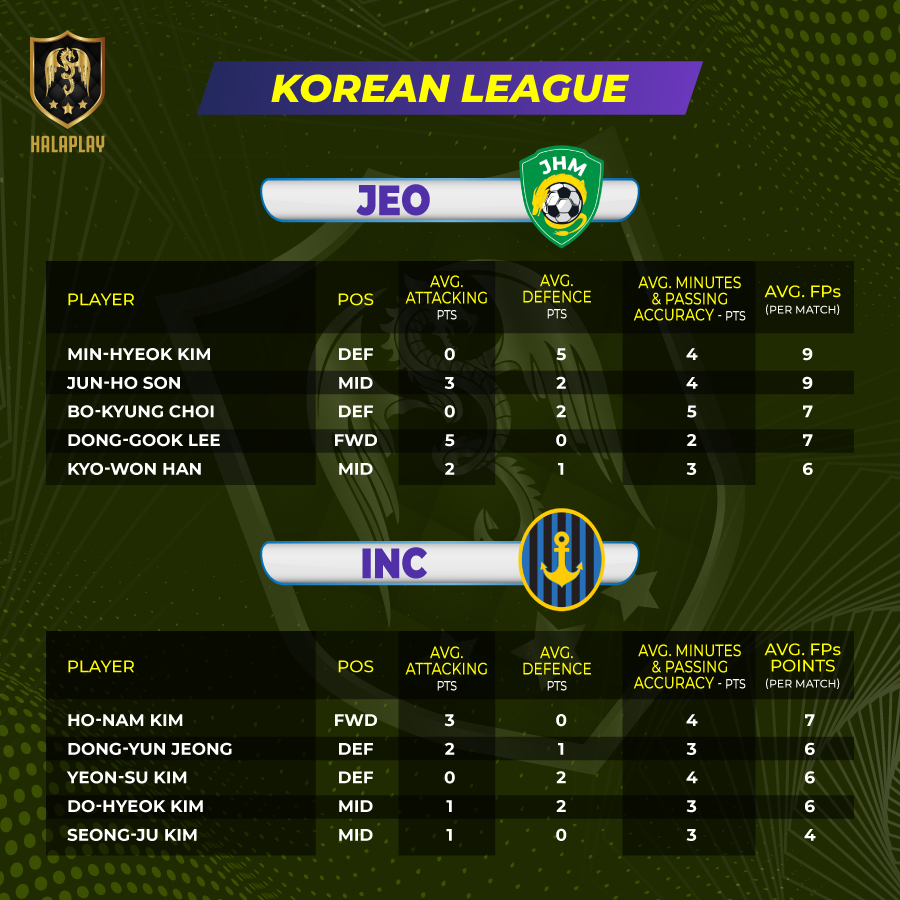 Pick your JEO vs INC playing 11